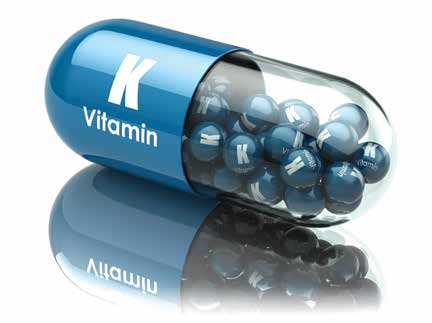 Mainstream medicine’s ongoing battle with cancer has mostly been limited to the two c’s, cutting and chemotherapy, frequently followed by radiation. These invasive therapies are not preventative; they’re attempted only after the cancer has been diagnosed. More natural methods, such as vitamin C and vitamin K supplementation, may also help tame the wild beast before it becomes unstoppable.

An essential nutrient, vitamin K regulates normal blood clotting. It also helps carry calcium throughout the body, reducing bone loss and the risk of fractures. According to the Susan G. Komen website, “In 2001, the National Institute of Medicine Food and Nutrition Board increased their recommended amounts of vitamin K slightly, but refused to make larger increases” without further evidence. While the jury is still out on this crucial supplement’s role in reducing cancer, many firmly believe there is hope.

Vitamin K has already been shown to suppress the growth of a variety of carcinomas, from liver to lung cancer. While some doctors have yet to embrace its potential to halt cancer in its tracks, others are optimistic. Lab studies have demonstrated the vitamin’s ability to help certain cancer cells, such as those found in leukemia, transform into normal white blood cells. The supplement has stopped the reproduction of cancer cells by means of apoptosis, or cell death, especially when added to certain cancer-fighting drugs. Studies in Japan, and elsewhere, revealed positive outcomes, even complete remission, for cancer patients who added vitamin K to their therapeutic regimen, especially in combination with vitamins D3 and C.

Many doctors and nutritionists believe that the amount of vitamin K considered optimal in healthy humans should be increased in order to prevent such diseases as cancer and osteoporosis. Natural ways to increase this vitamin include eating more leafy green and cruciferous vegetables, such as kale, spinach, parsley, romaine lettuce, Brussels sprouts, broccoli, cauliflower, and cabbage. Fish, meat, eggs, liver, and certain cereals also contain vitamin K.

Combining vitamins C and K can further contribute to cancer-cell death via autoschizis, meaning they split open, spilling their contents. The cancer cells basically consume themselves, cutting their size in half with their own digestive enzymes. It seems when it comes to cancer, it’s not just what you eat, it’s what you feed cancer cells that can lead to better health.

Before starting any new health related treatment or supplement, please
consult your doctor.