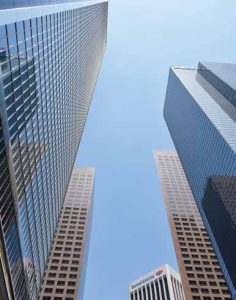 Downtown Los Angeles has so much history, and many of us never venture over there. You can do a historic walking tour to learn about the city and its growth told through architecture. There are so many iconic buildings to explore, all within walking distance from each other or a short Uber ride away. While you are there, be sure to grab a bite at the Grand Central Market or one of the terrific restaurants surrounded by the dramatic skyscrapers. 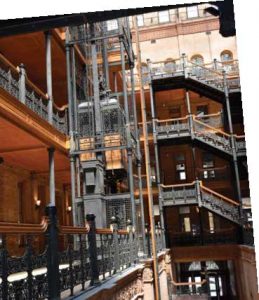 Built in 1893, the Bradbury Building is the oldest commercial building in the city to remain standing. This landmark offers a magical atmosphere with a light-filled Victorian court, open-cage elevators, marble stairs, and ornate iron railings. The building has not been shy to the silver screen. Throughout its lifetime, it has been featured in many films including Blade Runner and Marlowe. laconservancy.org/locations/bradbury-building 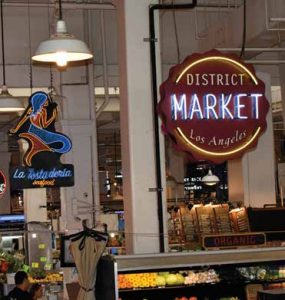 Grand Central Market
Hungry? Hop, skip, and jump over to Grand Central Market, opened in 1917, the ultimate food hall in the heart of DTLA. This vibrant market boasts multicultural stands and food stops to satisfy every taste bud, with 37 vendors in total. Be forewarned: Lunch hour is the most popular so to avoid thick crowds, visit midmorning or nighttime. They are open from 8:00 a.m. to 10:00 p.m. daily. grandcentralmarket.com 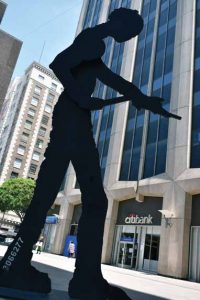 With bellies full, head over to the hub of the L.A. fashion industry. Sample sales, the ultimate Fashion District experience, are held every last Friday of the month. If you’re looking for a great selection of fabrics, you’re in luck standing amongst the largest selection of textiles and notions in the country. Over 1,000 stores sell to the general public at wholesale prices. fashiondistrict.org 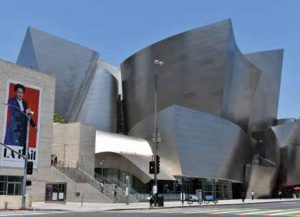 Walt Disney Concert Hall
In your trendy new ensemble, continue trekking to the home of the Los Angeles Philharmonic and the Los Angeles Master Chorale, Walt Disney Concert Hall. Built in 2003 by Frank Gehry, this stunning concert hall is a tribute to Walt Disney’s devotion to the arts and to the city. There is something marvelous to be said about the deconstructivist architecture and the jaw-dropping acoustics inside the building. laphil.com 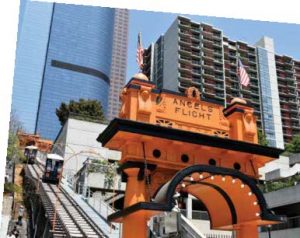 Save two dollars for the next iconic stop of the tour where you can rest your feet with a roundtrip ticket on the world’s shortest railway. Built in 1901, Angels Flight has given over 100 million rides along its hillside track. The 117-year-old funicular takes passengers on a quick ride between Hill Street and Grand Avenue on Bunker Hill. Albeit short, it is a sweet DTLA experience. angelsflight.org