Today’s veterans often return home only to meet with more of a battle— financially, emotionally, and physically. This past year alone, over 5,000 homeless veterans started living on the streets of  Los Angeles, 60% more than the preceding year, and the number continues to grow.

Fortunately, hope is also on the rise. Homes 4 FamiliesTM offers a solution for veterans struggling with homelessness. This nonprofit organization based in Woodland Hills was founded in 2008 with the mission to “build resiliency, economic growth, neighborhoods, and homes for veteran families.” Veterans included are anyone who served in the U.S. Army, Navy, Air Force, Marine Corps, or Coast Guard. The organization partners with local nonprofits and provides their unique My TIME (Trauma Informed Military Enrichment) services to help veterans and their families build better lives and communities. Donna Deutchman, president and CEO of Homes 4 FamiliesTM and a Thousand Oaks resident, acknowledges that California has more veterans than any other state in the nation. “These veterans were serving six to eight years,” she says, “and when they came home, they were couch surfing without a permanent home, living in the projects or living with a family of four in one bedroom at a relative’s. They were going to school during the day and doing shift work at night, trying to better themselves. They had been willing to serve and had been promised a shot at the American Dream.”

“It was decided that the organization’s efforts should be focused on helping veterans to achieve the American Dream and move into the middle class,” Deutchman continues. “Today’s veteran is not John Wayne. They grew up in low-income families and want to improve their circumstances. The length of the wars the U.S. has been fighting and the length of time they are expected to serve have prevented that.”

There’s an old proverb that states: “It takes a village to raise a child.” It also takes a community of concerned citizens to recognize a problem and work towards solving it. A proven solution has been to provide housing and other services not just to individuals and their families but to entire communities of veterans. This is done through a program known as the Veteran Enriched Neighborhood®. These neighborhoods must contain at least 12 units with a common garden and open space for families to congregate.

The program has been vetted by research created by the Urban Planning Department of CSUN, whose interns conducted research on more than 350 members of low-income families over a period of nine years. The outcomes were extremely positive. After members were provided housing in Enriched Neighborhoods, many improvements were noted, such as a 19% increase in household income, educational advancement, zero foreclosures, and a 99.99% percent high school graduation rate for the children. There are many other benchmarks of success as well. The overall goal is to help veterans move up the economic ladder. It was discovered that communities of veterans were more powerful than a single family left to fend on its own. These  neighborhoods provide no-cost financial training and social services plus health and wellness programs to enable families to become self-sufficient. Veterans and their families are taught new skills and given tools to help them move out of the endless cycle of poverty into the middle class.

It’s a win-win situation for everyone. The circles of success widen, starting with the individual veteran, then his/her family circle, his community of veterans, and finally the community at large. Those outside the neighborhood can find great satisfaction in knowing that more members of the community are headed for successful futures, which will, in turn, benefit the city, country, and world at large.

Enriched Neighborhood communities connect families with other local agencies that bring services right into the neighborhoods. Assistance begins 12 months before and continues 12 to 24 months after veterans move into their new homes. The organization’s construction and social services are 96–98% of spending each year. Only 2–4% annually goes to administration and fundraising costs. To date, Homes 4 FamiliesTM has created more than 144 homes in five Enriched Neighborhoods in northern Los Angeles County. Eighty additional homes for low-income veteran families are currently under construction. The organization also works with families in other regions of Southern California. 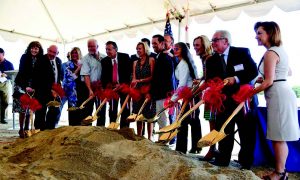 These heroic veterans served their country and, in turn, were promised a shot at the American Dream. Instead, many of them end up living a nightmare when they return home. These brave men and women frequently end up homeless and hopeless. They protected everyone else’s lives but can’t seem to make it on their own. All that many of them need is some assistance.

As we celebrate Veterans Day this November, give thanks to our veterans by donating time, money, or land to Homes 4 Families or consider becoming a corporate sponsor. Help veterans realize their American Dream. After all, it does take a village to raise one of its own.