Ever since grade school in Philadelphia, comedian and 10-year Calabasas resident Craig Shoemaker has been trying to make ’em laugh. He continues to work at it, spending many of his nights performing at such local clubs as the Canyon Club, Thousand Oaks Civic Arts Plaza, and others throughout Southern California. He is also slated for upcoming gigs at the Calabasas Country Club, where he produces a monthly comedy night.

During his long career, Shoemaker has appeared on Broadway, performed for four U.S. presidents, acted on network television, and hosted and produced reality TV. This WGA scribe of film and sitcoms, award-winning producer, and bestselling author is perhaps most proud of his contribution to Laughter Heals. 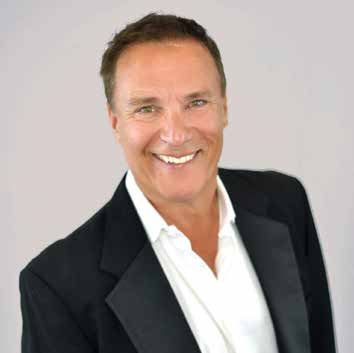 “After seeing countless examples of what levity has done for people’s health, it inspired the formation of a nonprofit initiative, LaughterHeals.org,” says Shoemaker. “Currently housed out of our new Westlake Village film and television studios, we work with cancer patients, drug and alcohol addicts, veterans, wounded warriors, and others, providing them with tools, awareness, and healing laughs to help them along their path of recovery.” He quickly adds, “Laughter is indeed
the best medicine.”

One of Shoemaker’s favorite perks of standup comedy is traveling all over the country fostering new friendships. “This job casts a wide net,” he says. “Now, some fish you want to throw back, but the keepers make for a deliciously full-life menu and worth the days at sea.” He also finds plenty to smile about with family and friends at his Calabasas home. “We often hear about celebrities moving to other states for the scenery and small-town vibe; well, we have our Montana or Wyoming right here. We can still stay close to our career pursuits and enjoy the entertainment advantages of living close to a big city.” He adds, “Education and extracurricular activities here are top notch too. And, an added bonus—the experiences coaching and observing youth sports has led to a ton of fresh comedy material!”