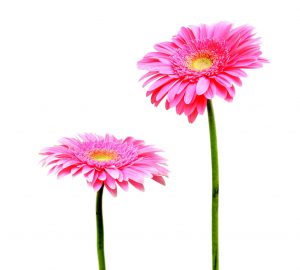 •
As mothers, we worry about our daughters more these days,
about how they will navigate their way in life. We want to protect
them, but we cannot always be with them. We want to
empower them to be strong and confident, to learn the life
skills they need to guide themselves in any situation they come
across. Involving girls in a variety of activities can help them
learn essential social skills necessary for speaking up and making
a difference while enhancing self-esteem. As role models,
we can teach our girls to have each other’s backs and to support
one another. There is so much cattiness that goes on in
schools that it is important for girls to have smaller group activities
or organizations to belong to where they can let their guard
down and flourish—a place where they can appreciate the other
girls around them and share what they have learned. Here
are three young women embracing life and taking steps to be
strong. They are choosing paths through sports, volunteer work,
and they support other young women by sharing their stories.
•

Giving Back Through the Girl Scouts
KIRSTEN JOHNSON 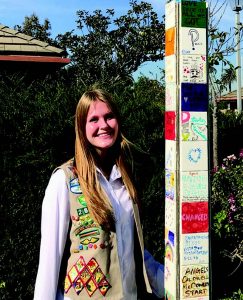 Kirsten Johnson proves firsthand that you’re never too young to do great things. For the past nine years, Kirsten, now 16, has been a member of Girl Scout Troop 2626 in Calabasas and is currently an Ambassador Girl Scout. Partnering with Casa Pacifica, a residential treatment center helping abused and neglected children and adolescents cope with emotional, social, behavioral, and mental health challenges, Kirsten created “Peace Poles” for the Casa Pacifica Camarillo campus. She inspired the kids to express themselves by painting ceramic tiles with meaningful symbols, words, and pictures. Her team decorated more than 200 tiles, which were then placed onto light poles in the campus courtyard. Kirsten’s selfless work and leadership skills put her in the running for the highest achievement in Girl Scouting, the Girl Scout Gold Award. Those who pursue this highly regarded national award must show outstanding leadership skills, creativity, value, and efforts to make the world a better place. Earning the Gold Award requires at least 80 hours in planning and implementing a challenging, large-scale project that is innovative, engages others, and has a lasting impact on its targeted community. Nationwide, only 6% of all eligible Girl Scouts achieve the Gold Award. Approximately one million Girl Scouts have earned the Gold Award or its equivalent since 1916. Kirsten is proud to participate in this great organization that has brought her many new friendships while enabling her to spread the positive message of giving back. This inspirational teen hopes to continue making a positive impact on her community through her involvement with the Girl Scouts. 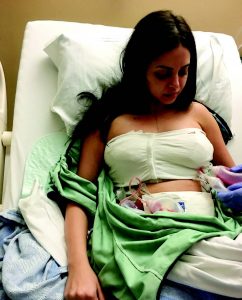 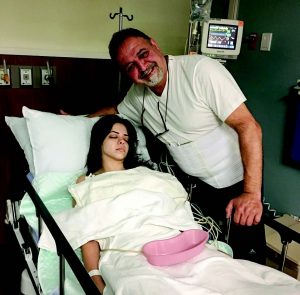 It is only through adversity and resistance that true strength reveals itself. Strength is fostered in one’s reaction to adversity; it is through hardships that one is able to see what one is truly made of.

Calabasas resident Nicole Mikhael was an ambitious and energetic 26-year-old. She loved hanging out with friends, traveling, and working out with her mom almost every morning. In August of 2016, she began working on her very own startup called “PAWTOO,” PAWTOO.com, set to launch in March of 2017. Nicole also used her natural intelligence as a volunteer tutor for Calabasas High  School football players during study hall. With drive, intelligence, and full of ideas, Nicole was on a pathway to a very successful future. 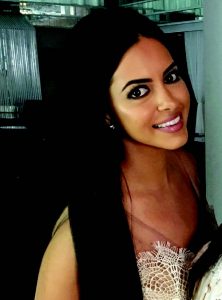 One day in late December 2016, as Nicole was putting on lotion, she noticed something unsettling. There on her right breast, behind the nipple, she felt a tiny lump. “Something in my gut was telling me to take notice,” remembers Nicole. Her mother reassured her that it was probably nothing but told her to get it checked out if she felt nervous. When Nicole’s gut feeling did not dissipate in the coming days, she decided to get the lump checked for her own piece of mind.

Days later, Nicole found herself at City of Hope medical center talking to a breast cancer specialist. The doctor assured Nicole that due to her very young age and her excellent health, the possibility of the lump being cancer was very low, though she did recommend getting the lump removed. In the doctor’s words, “Cancer is not an option.” Even after her doctor’s expert opinion, Nicole’s intuition could not be silenced.

On December 29, 2016, 10 days later, Nicole arrived again at City of Hope. As her doctor had promised, the lumpectomy went perfectly, and the recovery process was easy and relatively painless. Nicole began to feel relief in knowing that this tumor was no longer inside her body. On January 3, 2017, Nicole returned once again to City of Hope, this time for a follow-up on her recovery. 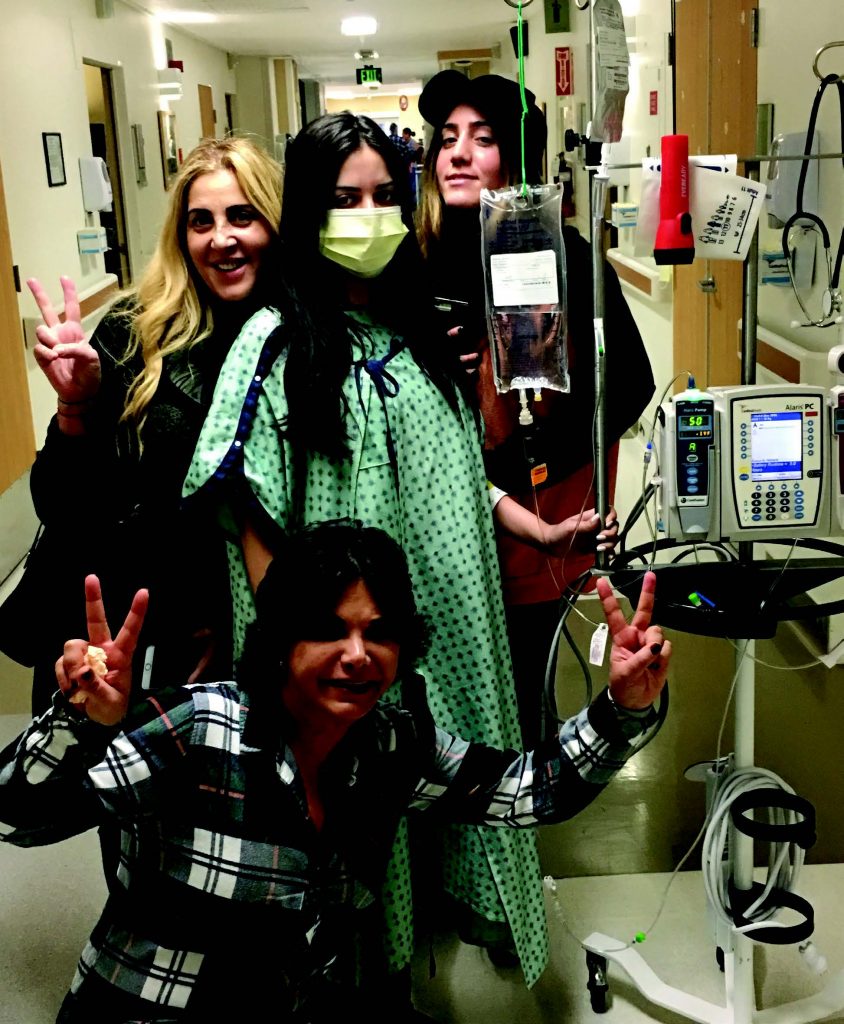 Nicole, her father, and her sister sat in the cold hospital room as she heard the doctor say one of the most terrifying words in the English language: cancer. “My world froze and I went numb,” Nicole recalls. “On the other side of the curtain, I could hear my sister bursting in tears and my dad hitting his head on the wall of the exam room. I had no reaction at that moment. I just responded with ‘Ok, what do I do now?’” 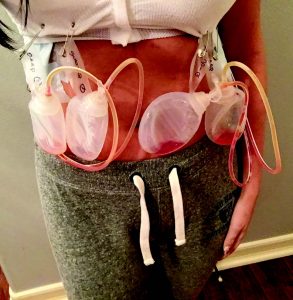 Over the next year, Nicole would have more surgeries than most people have in their whole lifetime. With five surgeries in one year, including a double mastectomy and two reconstructive surgeries, Nicole knew she was going to beat cancer. “Cancer is a scary word to hear, especially at age 26, however, I truly believe that God gives us as much as we can handle. When faced with tragedy, half the battle is mental.”

With an outpouring of love and emotional support from her family, friends, and the community, Nicole was never alone throughout the entire process. On December 29, 2017, exactly one year from the lumpectomy that began her journey, Nicole had her final breast reconstruction surgery. “Making the decision to have a double mastectomy at a young age is one of the hardest decisions a women can make. However, Dr. Galanis, my plastic surgeon for my reconstructive surgery, gives patients hope that they can look and feel better than before cancer. In other words, don’t be afraid of a double mastectomy,” says Nicole.

Now in remission, Nicole has been able to get back to the things she loves, including a new business she started called crystalzXcacti, crystalzxcacti.com “My life is the best it has been! I have a greater appreciation and understanding of how precious life truly is. 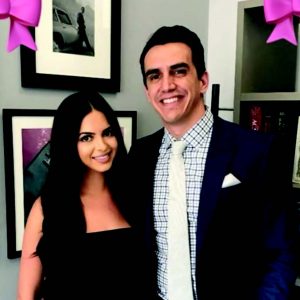 I don’t take things for granted, and I don’t sweat the small stuff. Having cancer really put things into perspective.” Nicole’s plastic surgeon, Dr. Galanis, wants all women to know that breast cancer affects one in eight women of all ages. Know your family history, and remember to perform self-checks daily. Always listen to your intuition. Like for Nicole, it could save your life. 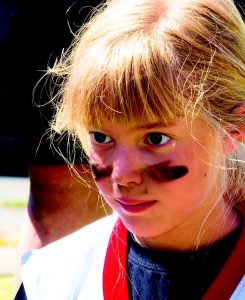 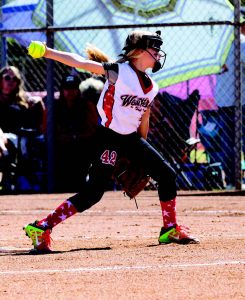 There are so many reasons kids should participate in sports, from building self-esteem and leadership abilities to developing healthy lifestyles and simply having fun. Whether you win or lose, players can always practice good sportsmanship. Ten-year-old Madison Saltz has been learning these important lessons and more while participating in team sports for the past five years. Her dedication to improving her skills in softball and beyond serves as an inspiration to others. Madison’s own role models include her coaches, especially her dad (who is currently coaching her softball team, the StormTroopers at the West Valley Girls Softball league); her teachers, Mrs. Angel and Mrs. Kirkhope; and Temple youth group advisor Sarah Kayne.

Madison proudly recalls how her team, the Blue Diamonds, won the championship game last year when she pitched seven innings against the fastest pitcher in the league. She’s gained a lot from softball, including good friends, added strength, and confidence. This “Little Engine that Could,” as Madison’s mom lovingly refers to her, brings an endlessly positive attitude to everything she does. This includes attending school plus ongoing pitching lessons and softball practice; reading favorite novels, such as Percy Jackson and Harry Potter; horseback riding; and doing archery. Softball has taught Madison that however many times you strike out, you will eventually hit a home run. Never give up! Teamwork is also crucial. Madison loves to help younger players grow and appreciates how her team cheers her on and, most importantly, how everyone works together towards a common goal. Future plans include learning how to throw rise and drop balls, memorizing the periodic table for her science class, and eventually getting a college softball scholarship.